Instead of waiting for people to come to them, the South Alberta Fetal Alcohol Spectrum Disorder (FASD) Network is going to the public.

Coordinator Debbie Deak says this is the first year the network is handing posters and coasters out to liquor stores and bars. 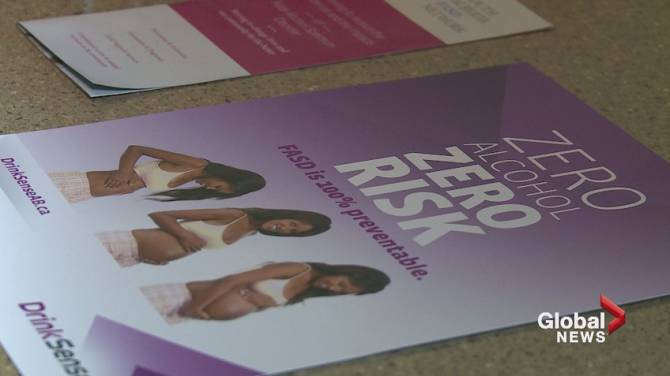 Click the link below to listen: South Alberta FASD Network is dropping off coasters and posters to bars, to encourage women and potential partners to learn about the risks of drinking during pregnancy.

“We used to meet on the church steps of South Minister United church and although we felt that we were meeting our efforts in that area, we wanted to reach out to a younger crowd this year – women 18 to 35 years of age.”

The McMan FASD Lifespan program is also a partner.  Supervisor Cheyenne Grayson says it’s a really good opportunity to bring the disorder to the forefront.

“Everybody needs reminders – young women, older women – it’s not actively on women’s minds unless they are maybe trying to get pregnant,” Grayson said.

Honkers Pub and Eatery is one of almost 25 bars that agreed to having awareness posters and coasters.

“I think this is awesome,” Honkers owner Vicky Vanden Hoek said. “I think it’s a great opportunity and everybody gets on board with it. It’s not just about today, it’s just about everyday.”

The Alberta government defines FASD as a “preventable, lifelong disability resulting from prenatal exposure to alcohol that has no cure.”

According to the South Alberta FASD Network:

Effects from the disorder varies from person to person.

“Alcohol affects the baby-developing brain, it could take the form of a physical or mental disability,” Deak said.

Deak says women who have been drinking during pregnancy need to know it’s never too late to stop.

“When we have a conversation with women, they need to understand there is no judgement attached – there are number of factors in her life impacting the decisions she is making,” Deak said. “If you are pregnant or thinking of becoming pregnant… there is no safe time, no safe amount, no safe kind.”

The network is keeping the conversation going through next week. Members will be at the University of Lethbridge and Lethbridge College during orientation to talk to women about prevention of FASD.

Disclaimer:  The views and opinions in this article are those of the authors and do not necessarily represent the views of Edmonton and Area Fetal Alcohol Spectrum Disorder Network.